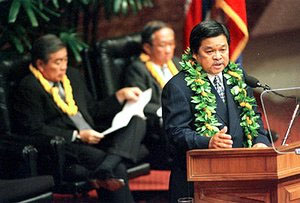 The state of Hawai‘i has two official languages as prescribed by the Constitution of Hawai‘i adopted at the 1978 constitutional convention: Hawaiian and English. Article XV, Section 4 requires the use of Hawaiian in official state business such as public acts, documents, laws and transactions. Standard Hawaiian English, a subset of American English, is also commonly used for other formal business.

Before the arrival of Captain James Cook, the Hawaiian language was a spoken, not written language. The first written form of Hawaiian was developed by American Protestant missionaries in Hawai‘i during the early 19th century. The missionaries assigned letters to Hawaiian sounds identical to English sounds. Later, additional characters were added to clarify pronunciation. The ‘okina indicates glottal stops while macrons called kahako signify long vowel sounds. When a Hawaiian word is spelled without any necessary ‘okina and kahako, it is impossible for someone who does not already know the word to guess at the proper pronunciation. Omission of the ‘okina and kahako in printed texts can even obscure the meaning of the word. For example, the word lanai means stiff-necked. However, when spelled as lanai it means veranda while Lana‘i refers to an island. This can be a problem in interpreting 19th century Hawaiian texts recorded in the older orthography. For these reasons, careful writers use the modern Hawaiian orthography.

As a result of the constitutional provision, interest in the Hawaiian language was revived in the late 20th century. Public and independent schools throughout the state began teaching Hawaiian language standards as part of the regular curricula as early as the kindergarten grade level. With the help of the Office of Hawaiian Affairs, also created by the 1978 constitutional convention, specially designated Hawaiian language immersion schools were established where students would be taught in all subjects using Hawaiian. Also, the University of Hawai‘i System developed the only Hawaiian language graduate studies program in the world. Municipal codes were altered in favor of Hawaiian place and street names for new civic developments.

Over the course of Hawaiian history, a third language was developed that is in common use throughout the state today. Originally considered a mere dialect of Hawaiian English, cultural anthropologists have recently reached consensus that Hawaiian Pidgin is a distinct language on its own. Hawaiian Pidgin finds its origins in the sugarcane and pineapple plantations as laborers from different cultures were forced to find their own ways of communicating and understanding each other. Laborer emigrants from different countries — China, Japan, Korea, Philippines, Portugal — began composing their own words and phrases based on their own language traditions merged with Hawaiian and Hawaiian English.

An increasingly divisive political issue that has arisen since the Constitution of Hawai‘i adopted Hawaiian as an official state language is the exact spelling of the state's name. As prescribed in the Admission Act of 1959 that granted Hawaiian statehood, the federal government recognizes Hawaii to be the official state name. However, many state and municipal entities and officials have recognized Hawai‘i to be the correct state name. Official government publications, as well as department and office titles, use the traditional Hawaiian spelling. Private entities, including local mass media, also have shown a preference for the use of the ‘okina. While in local Hawaiian society the spelling and pronunciation of Hawai‘i is preferred in nearly all cases, even by standard English speakers, the federal spelling is used for purposes of interpolitical relations between other states and foreign governments.

The delicate nuances in the Hawaiian language debate are often not obvious or well-appreciated outside Hawai‘i. The issue has often been a source of friction in situations where correct naming conventions are mandated, as people frequently disagree over which spelling is correct or incorrect, and where it is correctly or incorrectly applied.